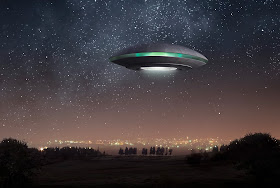 Last spring, historian Felix Harcourt taught a class at Emory on how conspiracy theories about UFOs have shaped American culture. He began the class with a question: “How many people believe alien life exists?”

Most people in the class raised their hand. “I think so, too,” Harcourt said. “Stephen Hawking thinks so. In a giant universe there is a distinct probability that somewhere alien life has evolved. It probably looks pretty different from us, but it might be out there.”

But what about the idea that aliens have visited Earth? And stories of human complicity in those visits — usually of government complicity?

The multitude of UFO conspiracy theories are considered laughable and serious discussion of them is labeled as a cultural taboo, Harcourt said. “Even as they are treated as laughable, they’re some of the most widely believed conspiracy theories. If we go back to the sixties, Gallup polls find 96 percent of Americans had heard of UFOs, 46 percent believed that they were real. By 1973, 57 percent believed that UFOs were real. By the nineties, 71 percent believed that the government was at least hiding information about UFOs: 'They may or may not be real, but there’s definitely more going on there than the government is letting us know.' And those numbers remain relatively stable.”

A 2015 poll showed that 56 percent of American believe that UFOs are real and 45 percent believe aliens have visited Earth. “To put that into context,” Harcourt said, “in that same survey, 57 percent said that the Big Bang theory was real.”

Harcourt goes on to discuss how various UFO conspiracy theories in the 20th century have changed, often paralleling societal anxieties at the time. Click here to watch the entire class on C-SPAN’s lectures in history series.

Harcourt taught the class as part of a course, “Politics and Paranoia,” while he was a post-doctoral fellow at Emory’s Fox Center for Humanistic Inquiry.
eScienceCommons at 10:21 AM No comments:
Share 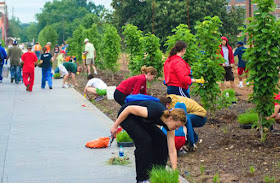 Judith Moen writes in Ensia Magazine about how the Atlanta BeltLine is serving as a model for the future of urban green space, driving economic, cultural and environmental renewal. Below is an excerpt from the article:

"Efforts to clean up 1,100 acres of contaminated brownfields and plant more than 3,000 indigenous trees and grasses are bringing back biodiversity not seen in decades.

"'The native plantings they have done had a tremendous positive impact,' says Berry Brosi, associate professor of environmental sciences at Emory University. 'We found enormous areas in terms of pollinator abundance.'

'I noticed for the first time in my backyard, we are seeing bees, butterflies, even fireflies, which is different than four years ago,' says Chad Ralston, who lives nearby and bikes almost daily."

Read the whole article in Ensia.