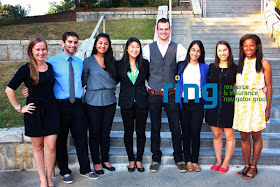 The opening day of enrollment for the nation's new Affordable Care Act (ACA) was more harried than usual for Emory senior Nick Goodwin, who faced a personal checklist that seemed daunting, even to him:

Meet with Grady Memorial Hospital officials to discuss ACA launch logistics. Run back to campus for an exam in "Opium to Obamacare" anthropology class. Swing by apartment, change clothes. Race to Norcross to join regional U.S. Health and Human Services reps at a community forum to field questions about the new ACA.

What Goodwin didn't anticipate was the simultaneous launch of a government shutdown that day as Congress argued over appropriations, effectively furloughing some 800,000 federal employees. Instead of a supporting role, Goodwin was suddenly part of the forum's main event, helping lead the discussion on looming health insurance changes.

And so he did, fielding complicated questions from veterans and stay-at-home parents and full-time workers — the insured, the uninsured and the underinsured.

From the man who paid $500-a-month insurance premiums through his employer, yet still had no coverage for his children, to families denied insurance due to pre-existing diseases, that day, Goodwin stood and answered questions until the crowd was satisfied.

For Goodwin, it was a defining moment — the culmination of a journey kick-started by his own curiosity, a desire to reduce economic disparities among those seeking health care, and the need to make a difference.

But what began as a simple idea snowballed, remarkably, into something much bigger, resulting in the creation of RING (Resource and Insurance Navigator Group), a new organization founded by Goodwin and a team of Emory students to train college-aged volunteers in health care outreach that will include educating the public about new insurance options under the ACA. The goal: Create RING chapters on university campuses throughout Georgia, building a network of young advocates who can help link consumers with information about much-needed basic services — helping shape the changing face of health care, one unexpected step at a time.