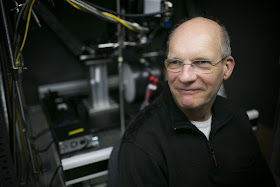 "We hope that our project will lead to an algorithm for basal ganglia and motor control circuits involved in movement control," says Emory neuroscientist Dieter Jaeger. (Emory Photo/Video)

To move or not to move. That is the question the brain grapples with routinely as it receives a stimulus, decides whether to direct the body to respond with an action, then sends the appropriate signals to control the behavior. It is a common and fundamental process, but we know little about how the brain actually does it.

“New technology allows us to monitor brain activity at high spatial and temporal resolution, and do so over long periods of time,” says Dieter Jaeger, a neuroscientist in Emory University’s Department of Biology. “This technology is finally opening the door to address questions related to the circuits involved in coordinating the relationship between neural sensing and physical action.”

Jaeger recently received a grant from the National Institutes of Health BRAIN Initiative to explore these questions about neural circuitry. He shares the $1.7 million award with Garrett Stanley, a neuroscientist in the Emory-Georgia Tech Wallace H. Coulter Department of Biomedical Engineering (BME). The BRAIN Initiative (Brain Research through Advancing Innovative Neurotechnologies) was launched by President Obama in 2014 as part of a widespread effort to gain fundamental insights for treating a range of brain disorders.

Areas of the brain involved in sensory input and movement include the basal ganglia, the thalamus and the cortex. What’s less clear is how neural activity flows through these areas, connecting a sensation to a decision to make a movement. Debilitating and difficult to treat neurological disorders like Parkinson’s disease, Huntington’s disease and dystonia are caused by dysfunction of this circuitry.

The Stanley lab specializes in tactile sensing and information processing, while the Jaeger lab is focused on motor and muscle coordination and control. 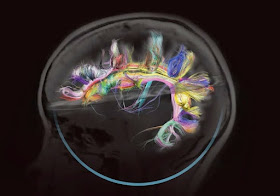 Image from the cover of the NIH brochure, "The BRAIN Initiative."

For their BRAIN project, Stanley and Jaeger are combining their two areas of expertise and experimenting with a mouse model. Techniques such as genetic voltage sensing will allow them to gain images of cortical electrical activity, with millisecond precision.

“We understand a lot about the biology of the brain,” Jaeger says. “The challenge now is to move beyond biology to algorithm. We hope that our project will lead to an algorithm for basal ganglia and motor cortical circuits involved in movement control.”

Such an algorithm could generate a computer program to simulate activity of the brain. “We could use this computer program to make predictions and run simulations,” Jaeger says. “It would be a great tool to test our understanding and compare against data. It’s important, because without such a tool, many clinical approaches to brain malfunction are groping in the dark.”

“Gaining basic insights into motor circuit function may reveal new possibilities for the treatment of neural diseases, as well as a better understanding of deep brain stimulation treatments already in use,” adds Stanley.

The project grew out of another collaboration between Jaeger and Stanley. They are also co-principal investigators of an NIH-sponsored training grant in computational neuroscience, which targets a new generation of scientists bound together through questions about how the brain computes.

“Through this interaction, Dieter and I got to know each other better, started to talk more science, and eventually came up with this project,” Stanley says.
eScienceCommons at 10:43 AM
Share