Fungi at root of plant drugs that can help, or harm, sick monarch butterflies 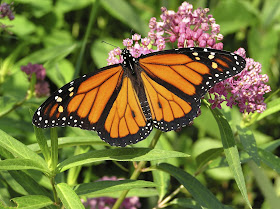 Chemicals in milkweed plants can cure, or kill, sick monarchs, depending on the dosage and the species of the plant.

Previously, biologists discovered that butterflies use plant toxins as a drug to cure their offspring of parasitic infections. Now they’ve dug a little deeper and found that the fungi associated with the roots of milkweed plants change both the nutritional and medicinal chemistry of milkweed leaves.

“We found that these changes caused by the fungi affect the growth of a protozoan parasite, so that monarchs become sicker on some milkweed plants and healthier on others,” says Jaap de Roode, the Emory biologist whose lab led the study.

Proceedings of the Royal Society B published the results, which provide a more complete and complex picture of infectious disease ecology than before.

Most infectious diseases are studied as two-way interactions between one host and one pathogen. “Here, we show that interactions among species from four different biological kingdoms – animals, plants, fungi and protozoa – determine infectious disease risk,” says Leiling Tao, the lead author of the study and a post-doctoral fellow in the de Roode lab.

Arbuscular mycorrhizal fungi form a symbiotic relationship with more than 90 percent of terrestrial plants, making them a key player in community ecology – the concept of interspecies interactions within and across ecosystems. The microscopic fungi receive carbon from plants. In return, they provide the plants with water and nutrients, mostly phosphorus and nitrogen.

“It’s well known that these fungi are important to plants and provide a lot of services, such as helping them cope with different types of stresses,” Tao says. “What we didn’t know before was that they also affect host-parasite interaction in animals above the ground.”

The findings not only add to the understanding of disease ecology in general, they could be important to human health, since about half of new pharmaceuticals are derived from plants, says co-author Mark Hunter, a chemical ecologist at the University of Michigan.

De Roode and Hunter discovered in 2010 that female monarch butterflies infected with the parasite Ophryocystis elektroscirrha prefer to lay their eggs on species of milkweed that will make their caterpillars less sick. Monarchs appear to have evolved the ability to medicate their offspring by choosing milkweed plants with high levels of cardenolides, a class of toxins that appear to kill the parasites.

And the Hunter lab had shown that mycorrhizal fungi associated with milkweed roots affect the levels of cardenolides in the plants. 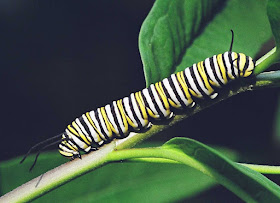 For the current paper, the researchers conducted greenhouse experiments on six species of milkweed that produce varying amounts of cardenolides. The plants were grown either with no mycorrhizal fungi, with low levels, or with high levels.

Monarch caterpillars were fed leaves from the various milkweed plants and then exposed to the protozoan parasite. The results showed the fungi are associated with both the virulence of the parasite and the ability of the monarchs to resist infection and to survive if infected.

The results also showed that the amount of the nutrient phosphorous associated with the fungi is important to the performance of the caterpillars. “It’s not just the drug dosage, but also the nutritional environment that determines the overall outcome,” Tao says.

“The interactions are really complex,” she adds. “It’s fascinating that even a species that is spatially distant, and from a different ecosystem, can have effects on how another species fights a disease.”