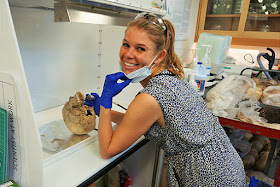 Kendra Sirak, an Emory PhD candidate in anthropology, is working as a visiting researcher at the Earth Institute at University College Dublin.

Kendra Sirak, a PhD candidate in anthropology in the Laney Graduate School, is currently working in Ireland, testing the DNA of people ranging from medieval Nubians to an ancient Chinese specimen to an Irish rebel.

Originally from the small town of Dallas, Pennsylvania, Sirak attended Northwestern University on an athletic scholarship for field hockey. "Starting out in psychology, I was inspired by an amazing young professor and became hooked after writing a research paper about the allegedly extinct subspecies Homo sapiens idaltu," Sirak recalls. "I wanted to study the past of humanity so I added anthropology for a double major."

Sirak came to Emory in 2012, drawn by the opportunity to work with George Armelagos, Goodrich C. White Professor of Anthropology (who passed away in 2014).

"I emailed George, who was one of the gods of anthropology, not expecting an answer," she says. "He responded in 37 minutes."

Now, Sirak is working as a visiting researcher at the Earth Institute at University College Dublin. Her research has also taken her to Russia, Hungary, Romania, China, India and Italy to access DNA in human skeletons and train other researchers in those techniques.

In an interview from Ireland, Sirak talks about her work and how she came to add genetics to anthropology, resulting in fascinating research and career paths.

What led you to add genetics to anthropology?

I had no interest in genetics, being totally dedicated to the study of human osteology and paleopathology. But George [Armelagos] believed DNA was going to become a critical part of anthropological research — and he couldn’t have been more right.

He proposed that I take some Nubian skeletal remains he had excavated in the 1970s to Ireland and learn how to do ancient DNA analysis at Trinity College Dublin.

I went home and cried because I didn’t want to say no, but I really, really did not want to go. However, I decided to just go anyway. It was the best academic decision I could have ever made. I stepped into the ancient DNA lab at Trinity and realized that I had been spelling “chromosome” wrong for as long as I could remember, which was where my knowledge of DNA was then.

What do you gain by combining anthropology with genetics in your research?

Genetics provides really fantastic, concrete data. However, it doesn’t provide the context that anthropology does. I like to think of genetics giving me the hard scientific data that I want, but anthropology adding in the human context and making the molecular data a human reality.

At Emory, I have learned how to think from a “biocultural” point of view. While many other anthropology programs stress only either a “biological” or a “cultural” approach, Emory combines the two.

I study the biology of past populations and I think about the way their culture and social environment could have influenced individual health and well-being, population demographics, patterns of morbidity and mortality, etc.

What have you been working on in Ireland?

Primarily extracting and sequencing DNA from skeletal remains from two socially disparate medieval cemeteries at the site of Kulubnarti in Sudanese Nubia. I am also part of a collaboration between University College Dublin and Harvard Medical School’s Department of Genetics lab.

We were recently contacted by the Irish National Police to help identify the remains of Thomas Kent, executed by the British for his part in the Easter Rising insurrection in 1916 and buried in a shallow grave on the grounds of Cork Prison; however, his body could not be positively identified. Collaborating with another team, we came up with this novel method to compare genetic data collected from two of Kent’s known living relatives and confirm his identity. He was given an honorable burial and a big state parade.

What other projects do you have in the works?

We hope to become involved in the Duffy’s Cut Project. Duffy’s Cut is the location of railroad tracks west of Philadelphia built by 57 Irish immigrants in the mid-1800s. All 57 are thought to have died from cholera. However, forensic evidence suggests that some might have been murdered, perhaps because of fear of contagion. We are hoping a DNA analysis on these samples will help identify these men and their family relationships.

We are in conversation with an Irish human rights group about identifying the remains of more than 800 Irish babies uncovered in a mass grave in western Ireland. This grave was a consequence of the period when it was not socially acceptable for a woman to have a baby out of wedlock. The ultimate goal would be a database of the unidentified infants’ genetic information. Then people who believe they might have some relative in this mass grave could be tested for a genetic match. This project was presented at the United Nations.

What are your post-Emory plans and goals?

My goal is to start writing my dissertation, a bioethnography of the ancient Nubians, this fall and be graduated from Emory in June 2018. Post-Emory, I can see myself applying for a postdoc position to expand my research, or I might like to get involved with scientific communication to the lay public. After taking a human genetics course taken at Emory, I’m really interested in genetic counseling. I’ve been thinking about becoming a certified genetic counselor.

What do you like to do in your “off” time?

I am a world traveler, marathon runner and craft beer connoisseur. Studying anthropology and working in ancient DNA has given me incredible opportunities to travel around the world to collect samples for our analyses.

Related:
Bone to be wild: Every skeleton has a story to tell
eScienceCommons at 6:33 AM
Share