Using big data to zero in on a mosquito menace 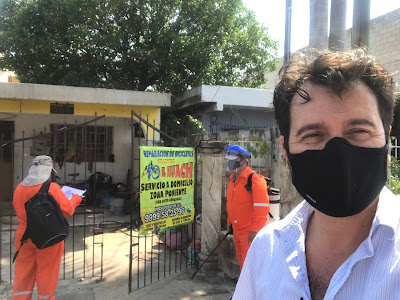 "The ultimate goal is to give public health officials the power to do more effective and efficient mosquito control — even before an epidemic beings," says Gonzalo Vazquez-Prokopec, right, shown with public health technicians in Merida, Mexico.
Scientists from Emory University are leading a new strategy in humanity’s long-running war with the mosquito, using big data to target one species of this tiny disease vector. They have studied the behavior of the Aedes aegypti mosquito, pinpointing where it hangs out in homes. They are mapping cases over time of viral infections that this species can transmit when it bites a human — including dengue fever, Zika, chikungunya and yellow fever. They are zeroing in on high-risk neighborhoods for outbreaks of these diseases in sprawling urban areas of the tropics.
“We’re working on some of the boldest and biggest changes in decades for the surveillance and control of this mosquito,” says Gonzalo Vazquez-Prokopec, associate professor in Emory's Department of Environmental Sciences.
The National Institutes of Health’s Division of Microbiology and Infectious Diseases awarded Vazquez-Prokopec a $6.5 million grant to lead a consortium in a randomized clinical trial in Merida, Mexico, as part of the quest to reduce Aedes-borne viral infections. The trial is testing a novel intervention that previous Emory research finds promising: Indoor residual spraying of insecticide, targeted to the places in homes where this mosquito tends to rest.
Read the full story here.
Related:
Mapping dengue hot spots pinpoints risks for Zika
Contact tracing, with indoor spraying, can curb dengue outbreak
eScienceCommons at 1:41 PM
Share