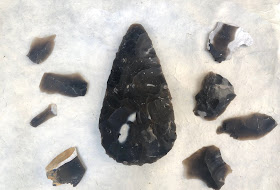 As humans evolved our brains became bigger and our technology became more complex. While brains can be compared by size and other concrete measures of form and physiology, quantifying technological complexity has proven more challenging.
“Although we know that some human technologies have grown more complex and sophisticated with time, we actually don’t know exactly what we mean when we say that because we haven’t had a good way to measure that complexity,” says Dietrich Stout, associate professor of anthropology at Emory University. “Is a straight razor more, or less complex, than a baseball bat? Are Polynesian fishing nets more, or less, complicated than lassoes used by reindeer herders in Lapland?”
Now, Stout and colleagues have developed the first computational method to measure fluid human actions to try to answer such questions. Scientific Reports published their method, based on the making and use of different types of Stone Age tools.
Read more about the research.
eScienceCommons at 8:22 AM
Share