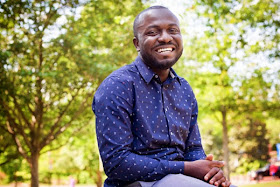 Emory graduate Kwadwo "Kojo" Sarpong, a native of Ghana, felt compelled to do something about the opportunity gap in Africa between men and women scientists. Emory Photo/Video.

When a White House invitation to the first U.S.-Africa Leaders Summit showed up in his email last year, Emory senior Kwadwo Sarpong didn’t give it much thought. “I honestly thought it was some kind of a joke,” says Sarpong, who graduated from Emory this month with a degree in neuroscience and behavioral biology (NBB).

But when a second invitation soon followed, Sarpong took notice.

“The Obama Administration’s Office of Public Engagement was interested in what I was doing to bridge the opportunity gap between male and female scientists in Africa,” explains Sarpong, who is known to his friends as “Kojo.”

That’s how Sarpong, who is from Ghana, found himself attending an event with top African officials, international leaders and U.S. cabinet members, where he represented the African Research Academies for Women (ARA-W), an organization that he co-founded to nurture the interests of aspiring female scientists in Africa by providing hands-on experience in research laboratories.

Sarpong arrived in Atlanta in 2009 with one goal: education.

Growing up in Ghana, the youngest of four boys, he was deeply aware of shortcomings within the nation’s healthcare system. When one of his brothers became ill with paralytic polio, he recalls that some blamed it on evil spirits.

Stricken with severe fevers while growing up, Sarpong spent considerable time in hospitals himself, an experience that would feed a budding interest in medicine.

During his first year of studies at the University of Ghana, Sarpong was thrilled to learn he’d “won a green card” and the chance to travel to the U.S. “Like a lot of African students, I had very high hopes and dreams — I was going to transfer directly into an American university,” he recalls, smiling. “Instead, I ended up living with my cousin in Atlanta and working as a housekeeper at a medical center and a cashier and warehouse associate at Walmart.”

As friends back in Ghana were preparing to graduate from college, Sarpong studied their Facebook photos. While their lives were moving forward, his seemed stuck. “Everybody thinks that you come to America and your life will change,” Sarpong says. “I was beginning to wonder if I had made a mistake.”

In time, he began taking classes in chemistry at Georgia Perimeter College. Motivated by his brother’s experience with polio, “I became very interested in neuroscience,” he says.

With the help of Emory’s Initiative to Maximize Student Development — a program funded by the National Institutes of Health to expand scientific workforce diversity — Sarpong arrived as a transfer student in Fall 2013.

Talking about his experiences one day with a friend who had graduated from the University of Ghana, he was shocked to learn that she had taken a job as a bank teller — the only position she could find. “There is nothing here for women in science,” she told him.

Sarpong felt compelled to do something about the opportunity gap that exists in Ghana — and much of the developing world — between men and women in the sciences. “Ghana is still a male-dominated culture,” he explains. “I began thinking about what I could do to create social change with something I really love — research.”

Read more in Emory Report.
eScienceCommons at 8:51 AM
Share