A physicist's guide to foam and fortune 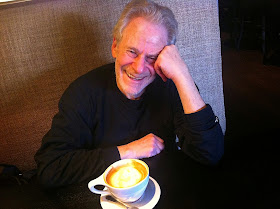 From foam to Frankenstein: Sidney Perkowitz enjoys a cappuccino (extra foam) at the Ink and Elm in Emory Village. So far this year he has published his first e-book, Universal Foam 2.0, and started work on a new book project, "Frankenstein 2018." (Photo by Carol Clark)

You never know what’s going to bubble up on the agenda of physicist Sidney Perkowitz, Emory Candler Professor of Physics Emeritus. Since the 76-year-old Perkowitz retired in 2011, he seems to pop up everywhere, from the Atlanta Science Festival to South Korean national television to a high-level policy meeting in Washington DC.

After 42 years of research and teaching at Emory, he has shifted his focus from the lab and classroom to the wider world. His mission: Communicating science in ways that get people interested and better informed.

“You’re doing something good for society if you can convey science well to a lay person,” Perkowitz says. “You can have an influence over everyone from a child to a congressman.”

Perkowitz began writing about physics for a general audience when he was about 50. “It forced me to be humble because I had a lot to learn,” he says. “Several editors really helped improve my writing. One gave me this great tip: “Remember, you don’t want to simplify the science. You want to simplify the writing.’”

Perkowitz has written six books about physics geared for a lay audience. His most successful, “Universal Foam,” was published in 2001 and remained in print through 2008, including five foreign editions. The book describes the myriad incarnations and inherent mysteries of foam, from densely packed bubbles floating atop a cappuccino to ocean white caps, soap bubbles, and exotic foamy materials used in aerospace and medicine.

Watch a clip from an English-language version of a South Korean documentary inspired by Perkowitz' book on foam, including interviews with Perkowitz:


Last fall, the book brought a Korean television film crew to Perkowitz’s door. “The filmmakers had contacted me out of the blue and said they wanted to make a documentary for children based on the book,” he says. “They sent over a cameraman, a sound guy, a director and a translator.”

So that’s how Perkowitz found himself in his kitchen, brewing a cappuccino as he was being interviewed about the wonders of foam. “We had a wonderful time,” he says of the experience. “The most amazing part was they paid me! It wasn’t a lot, but I was just doing it for fun. So that was a pretty great deal.”

The documentary, “Bubbles That Can Change the World,” was funded by the South Korean government and shown throughout the country as a way to inspire children’s interest in science.

After the publisher stopped putting out new editions of “Universal Foam,” Perkowitz obtained the rights so that he could update it himself as an e-book in January. He titled it “Universal Foam 2.0” “It’s amazingly easy,” Perkowitz says of the process of producing an e-book. He adds that he primarily did it to gain experience with e-books, and doesn’t expect it to sell many copies at this stage. “I just love learning something new and being engaged,” he explains. “And I want to feel that I’m doing something useful for science.”

During the past four years, Perkowitz has also written 20 magazine articles, given public talks, and serves on the science outreach committee of the American Association for the Advancement of Science, which takes him to Washington DC occasionally.

A selection of some of the many editions of Mary Shelley's classic "Frankenstein." (Andy Marbett)

Perkowitz is now at work on this seventh book, which has the working title "Frankenstein 2018." He is both contributing a chapter and co-editing the book, an anthology due out March 11, 2018, the bicentennial of the publication of Mary Shelley’s novel.

“There is something in humanity that wants to find a way to create life and to live forever. But that same desire is also full of fear,” Perkowitz says of the enduring appeal of Frankenstein.

The subject is more relevant than ever. Emory’s Center for Ethics is hosting a major international gathering in Atlanta May 17 to 19, to discuss both aspirations and guidelines for the era of synthetic biology. Biotechnology and the Ethical Imagination: A Global Summit (BEINGS) will bring together delegates from the top 30 biotechnology producing countries of the world.

“The idea of genetic engineering and creating an entirely new being is the 21st-century version of Frankenstein,” Perkowitz says. “Earlier, creating life was envisioned as stitching together dead body parts and zapping them with electricity. Now it’s about getting a micro-scalpel and moving around genes. Some people are afraid of genetically modified food. Imagine how they’ll feel about genetically modified animals and people.”

Perkowitz’ co-editor for the book project is Eddy Von Mueller, an Emory lecturer in film and media studies. The two have already rounded up a dozen contributors for the project, from religion, the arts and sciences, and secured a contract from Pegasus Books.

“Frankenstein is taught often in college classrooms, so we think this anthology might be a good seller as a textbook,” Perkowitz says. “The publisher agreed.”
eScienceCommons at 6:51 AM
Share