For spider monkeys, social grooming comes at a cost 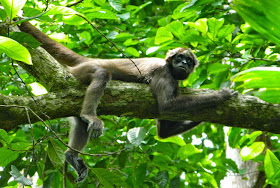 Spider monkeys are fission-fusion socializers, meaning they often break up into smaller groups and then rejoin the larger community. "They basically hang out with whoever they want, and that changes often," says Thomas Gillespie, an Emory disease ecologist. (Photos by Rebecca Rimbach)

Social grooming, or helping others to stay clean and free of lice and other ecto-parasites, has long been associated with hygiene and good health in wild primates. In the process of picking out ecto-parasites, however, the groomers may be picking up internal ones, a new study finds.

The journal Philosophical Transactions of the Royal Society B published the results of the study on critically endangered brown spider monkeys, showing that physical contact is associated with the spread of several common gastrointestinal parasites. 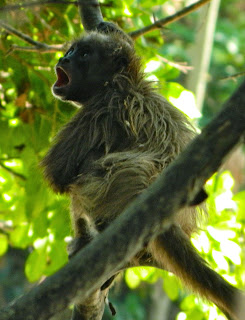 “Previously, it was generally assumed that animals are more likely to pick up these parasites from feces or other environmental sources,” says Thomas Gillespie, a disease ecologist at Emory University whose lab led the study. “Our research shows that the external surfaces of animals can serve as viable locations for development to infective stages of such parasites.”

Living in groups comes with costs and benefits. The benefits include more eyes, ears, noses and collective knowledge to hunt food sources and to avoid predators. The costs are competition for food and for mates. And growing evidence is revealing how group interactions affect the dynamics of disease transmission among social animals.

“Breakthroughs in technology are allowing for more detailed network analyses, so that we can study the connection between sociality and health in ways that we couldn’t in the past,” Gillespie says. “We are working on models of health risk factors for different species of endangered primates, to try to ensure that disease does not finish them off, but our data could also have implications for people.”

The current study centered on a community of 16 brown spider monkeys in Hacienda San Juan, a patch of tropical rainforest in central Columbia.

Watch a data visualization of the day-to-day movements of the spider monkeys, created by study co-author Donal Bisanzio, who was an Emory post-doctoral fellow.


Spider monkeys are arboreal, spending most of their time in the trees. They swing from branch to branch through the canopy by their prehensile tails. Their communities split into smaller groups that later reconvene, a trait known as fission-fusion.

“They basically hang out with whoever they want, and that changes often,” Gillespie says. This fission-fusion trait is associated with intelligence, he adds, and is also seen in chimpanzees, dolphins and humans.

While humans are far more complex, subdividing into groups bound by their families, churches, schools and workplaces, brown spider monkeys split into smaller groups primarily to search for food. “That enables them to cover more ground,” Gillespie explains. “They spend most of their day looking for ripe fruit, in between mating and playing.”

The monkeys keep in contact with other members of the group through loud vocalizations. “They can really put on a show when they’ve found a fig tree full of fruit,” Gillespie says. 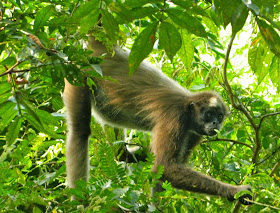 Spider monkeys are arboreal, spending most of their time in trees.

The interactions of fission-fusion animals are difficult to study in the wild because they are often on the move. For this study, the research team followed 12 individual spider monkeys of the community, collecting about 160 hours of data for each of them over the course of two years. The researchers recorded all social interactions that involved physical contact – including grooming, resting, embracing, mating and social play – and the duration of each interaction. They also collected a total of 166 fecal samples from the study group during the two-year period of the study and tested them for a variety of parasites.

The researchers used the data to diagram the contact and proximity networks, along with the levels of parasite infections, for each individual.

“Our findings suggest that social grooming is the biggest risk for parasite transmission among this community of spider monkeys,” Gillespie says. “The groomer is removing matted fur and debris from another monkey, and some of that debris can contain active life stages of parasites that are not visible to the naked eye.”