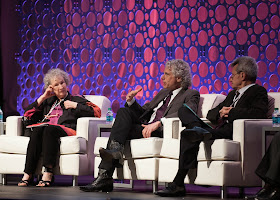 Novelist Margaret Atwood on stage at BEINGS with cognitive scientist Steven Pinker (center) and Thierry Magnin, who is a physicist, Catholic priest and professor of ethics.

Some of the world’s preeminent scientists and bioethicists gathered with leaders of philosophy, sociology, law, policy and religion in Atlanta May 18-20 for BEINGS 2015. The landmark summit launched work on a global consensus for the direction of biotechnology for the 21st century.

The setting for this futuristic event: The Tabernacle, an historic former church turned music venue, with red walls swirled with murals and wood floors that creak like the deck of a ship. Novelist Margaret Atwood, creator of fictional laboratory creatures such as the pigoon, gave a keynote.

“The lid is off the Pandora’s Box of genetic modification,” Atwood said. “This is a pivotal moment. Deliberate well. Keep the bar high. Take precautions.”

And with that, the tumultuous voyage began.

BEINGS, short for Biotech and the Ethical Imagination: A Global Summit, was organized by Paul Root Wolpe, director of the Emory Center for Ethics. “The idea is audacious,” Wolpe admitted of their plan to write global guidelines for the aspirations, ethics and policies of biotechnology within the next eight months.

Paul Root Wolpe on the potential and perils of biotechnology:


The BEINGS delegates are up to the task, he added. About 135 delegates from 25 countries joined the summit to take up the challenge of charting a course for how biotechnology can best contribute to human flourishing while navigating the potential perils and ethical pitfalls.

Harvard cognitive scientist Steven Pinker threw down the deregulatory gauntlet. “Stay out of the way” of biotech innovation, he urged, as scientists seek to prevent, treat and cure diseases. He cited major improvements in life expectancy around the world largely due to biomedical breakthroughs.

Pinker downplayed fears of eugenics and “designer” babies, while others countered that we are living in a world of competition and should be extremely concerned about the potential power to “edit” the genes of the human germline.

Princeton’s Ruha Benjamin, author of “People’s Science: Bodies and Rights on the Stem Cell Frontier,” called for the inclusion of those who identify as disabled in discussions about the goals and policies of biotechnology. “Anything less is presumptive and paternalistic,” she said.

It’s important to think about how to distribute benefits, added Benjamin, an assistant professor of African American Studies focused on issues of science and health. “There is no such thing as trickle-down biotech.”

Benjamin and three other delegates summarized their thoughts in an opinion piece for the Guardian: “As we pursue promising treatments, we should also be asking what we are trying to treat; whether it is best treated biomedically; who is included as funders, patients, donors and scientists; who is left out; who profits; and whether or not the treatment masks, depoliticizes, or exacerbates political and social inequality.”

By the afternoon of the first day of the summit, Wolpe said he knew the gathering was going to be a success. “I could tell by the tone of the conversation, and how people were lining up at the microphones to speak, that we had struck a chord,” he says. “We need to bridge a tension in philosophies, but both sides believe that curing human diseases and stopping suffering is an important goal. We have to get outside of the theoretical arguments and start talking about practical, specific issues.”

Aspirations and Goals: How should we think about differing goals of biotechnology, from making money, to curing disease, to understanding the basic nature of the organic world, to promoting human flourishing?

Alien Organisms and New (ID)entities: Cellular biotechnologies enable us to engineer novel organisms for industrial, environmental or therapeutic purposes. How might these organisms modify existing social systems and ecosystems, and how do we balance innovation with responsibility?

Bioterror/Bioerror: What are the potential dangers of synthetic biological materials and pathogens in terms of accidents or criminal intent?

Ownership: Should custom-designed genetic material or organisms be subject to patents and copyright?

Donorship: How can government and private sector entities collaborate to protect donors and create standards for bio- and stem-cell banks?

“All voices have a place,” Wolpe stressed. “We don’t have to agree on everything. Wherever we have honest, important disagreement in an area, we will note it in the final document.”

At the end of the summit, more than 80 delegates committed to actively working on writing the guidelines for the five major topic areas. Another 30 agreed to serve as reviewers and editors as drafts are ready. Their goal is to have a final document by next January, which they will submit for publication by a major journal.

“We do not represent just a single segment of society or government body or special interest,” Wolpe says. “We’re a group of global citizens who believe that for biotechnology to be used successfully it has to be used ethically. We as a group can create a document that is persuasive and has value.”

Related:
The science and ethics of X-Men
Blurring the lines between life forms
eScienceCommons at 12:54 PM
Share