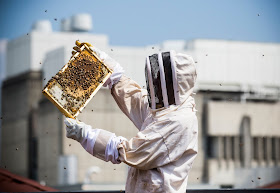 "The fate of bees will affect people very viscerally," says Berry Brosi, shown tending his hive on the roof of Emory's Math and Science Center.

President Obama recently launched perhaps the most ambitious national plan ever aimed at protecting insects. The National Strategy to Promote the Health of Honeybees and Other Pollinators calls for an “all hands on deck” approach to slow their alarming declines. “Pollinators are critical to our nation’s economy, food security and environmental health,” notes the plan, prepared by the White House Pollinator Health Task Force.

“It’s an important wake-up call,” says Berry Brosi, an Emory biologist and ecologist whose research encompasses both managed honeybees and wild bees. “It’s past time for us to realize the vital links between biodiversity, our environment and our own well-being. Ultimately, that’s what this national plan is about.”

Honeybee pollination alone is worth more than $15 billion to U.S. agriculture, “providing the backbone to ensuring our diets are plentiful with fruits, nuts and vegetables,” the plan states. “Pollinators, most often honeybees, are responsible for one in every three bites of food we take.”

“This isn’t about saving an exotic animal in a faraway place, like the panda,” Brosi says. “We’re talking about the possibility of not having nuts and fruits for our breakfast, shortages of tomatoes and melons, and rising milk prices due to a lack of alfalfa pollination.”

Bees are important to more than just food crops, he adds. Cotton plants, for example, need pollination to produce the fibers that are a cornerstone of the garment industry. 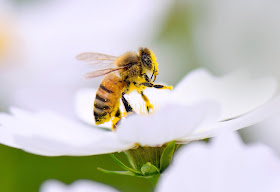 Pollinators are responsible for one out of every three bites of food we eat.

Many pollinators, including bees, birds, butterflies, bats and other animals, are in serious decline in the United States and worldwide. Brosi is one of 75 authors working on a global assessment of pollinators for the UN’s Intergovernmental Panel for Biodiversity Ecosystem Services (IPBES).

“In some places in China, people are hand-pollinating apple trees because they don’t have enough of an insect workforce to do it,” Brosi says. “Examples like that should be sobering. Pollination is an extremely labor-intensive task that bees are specially evolved to do.”

Currently, about 2,000 commercial U.S. beekeepers manage their bee colonies as “livestock,” traveling across the country to service pollination contracts with farmers and honey producers. Each year, however, the number of bee colonies has gone down even as beekeepers struggle to rebuild them. Since the 1940s, when there were about 5.7 million colonies in the United States, the number of managed colonies has shrunk by nearly half, according to the USDA.

“Wild bee populations are also declining wherever we look, although we don’t have good long-term data,” Brosi says. “Several species of bumble bees, for example, are declining at alarming rates, and we’ve seen the extinction of at least one species in the United States during the last 20 years.”

The reasons for these losses appear to be myriad and complex, ranging from shrinking habitats to parasites, diseases and pesticide use.

The phenomenon of the winter migration of the monarch butterfly, from across the United States to Mexico, is also imperiled. The three lowest overwintering populations of the Eastern monarch on record have occurred during the last 10 years. The all-time low was recorded last winter, when the monarchs occupied just 0.67 hectares, or 10 percent of the habitat in Mexico that they did two decades ago.

Emory evolutionary biologist Jaap de Roode, who runs one of the few labs in the world focused on monarch butterflies, says that most of this decline is due to disappearing habitat, especially the milkweed plants that monarchs feed on as caterpillars. “Preservation of remaining milkweed and restoration of habitat are key to maintaining the spectacular migration of this iconic insect,” de Roode says.

The White House pollinator strategy outlines specific aims and a timeline to achieve them, including:

Reduce honeybee colony losses during the winter to no more than 15 percent within a decade.

Boost the overwintering population of the Eastern monarchs by 225 million butterflies occupying approximately six hectares (15 acres) of habitat in Mexico by 2020.

Restore or enhance seven million acres of land for pollinators over the next five years.

The strategy recommends an additional $20 million in funding for the USDA specifically for pollinator research and an additional $1.5 million for the Environmental Protection Agency’s pesticide research programs.

“It’s great that the strategy has specific goals and recommendations, but it doesn’t go nearly far enough, particularly in the area of pesticides,” Brosi says. 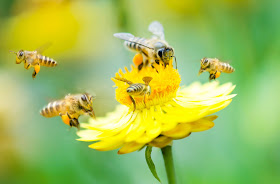 Ninety percent of flowering plants and many other animals, not just humans, depend on pollinators for their survival.

A class of pesticides known as neonicotinoids, for example, are widely used in the United States but banned in Europe due to their effect on bees. While neonicotinoids may not kill bees outright, they can have devastating sub-lethal effects, Brosi says. Even minute doses of these pesticides have been found to hamper bees’ learning, memory and navigation skills.

The national pollinator plan calls for an expedited review of the use of neonicotinoids in the United States, to be completed by 2018. “That’s not soon enough,” Brosi says, adding that the plan’s recommendation for $1.5 million for the EPA’s pesticide programs is a drop in the bucket.

“We need to do serious assessments of the effects on pollinators for a wide range of pesticide types,” Brosi says. “We don’t know much about alternatives to neonicotinoids. Farmers could replace them with something even worse.”

Ninety percent of flowering plants and many other animals, not just humans, depend on pollinators for their survival. “There could be a lot of hidden declines occurring in association with declines in pollinators that we won’t pick up on for a long time,” Brosi says. “A lot of trees are long-lived, for example, so if their populations are not regenerating normally we may not notice it right away. That’s frightening, and one of the areas I’m most concerned about.”

One optimistic note is that bees and other insect pollinators tend to be highly resilient, Brosi adds. “They can thrive in places you wouldn’t expect, such as cities. It’s an interesting conundrum that pollinators do the worst in industrial agriculture areas where we need them the most. A bigger solution to this problem needs to be re-imagining the ways in which our agricultural system functions. When you limit the diversity of plant species and douse fields with pesticides, it can have a lot of unintended negative consequences.”