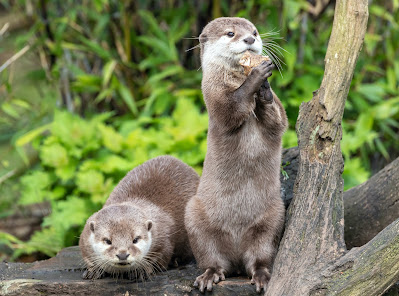 Otters are Mustelids, a diverse group of carnivorous mammals that includes mink and ferret — two other species that have also become infected with SARS-CoV-2. (Getty Images)
By Carol Clark

The recent positive SARS-CoV-2 tests of Asian small-clawed otters at the Georgia Aquarium add to the mystery of why some animals may be more susceptible than others to the virus that causes COVID-19.

“In one sense, it’s not surprising to see otters infected, because we’ve already seen infections in mink and ferrets, which are closely related species,” says Thomas Gillespie, associate professor in Emory University’s Department of Environmental Sciences and Rollins School of Public Health.

Otters, mink and ferrets are all Mustelids, a diverse group of carnivorous mammals, notes Gillespie, a disease ecologist who studies how pathogens jump between wildlife, domestic animals and people.

Most of the research into what animal species may be susceptible to SARS-CoV-2 is based on the genetics of protein binding sites that the virus uses to gain a foothold in a host. People, great apes and some monkeys have the highest susceptibility, according to this research, Gillespie says.

In January, some members of the gorilla troop at the San Diego Zoo tested positive for SARS-CoV-2, after they exhibited COVID-19 symptoms.

“What’s surprising,” Gillespie says, “is that Mustelids are at the opposite end of the spectrum in terms of a binding propensity with SARS-CoV-2. In one of the more robust studies to date, they fell into the lower range of binding scores among 400 species of vertebrates. And yet, they keep popping up with infections. That’s where the mystery lies.”

The Georgia Aquarium announced in an April 18 news release that the otters were tested after showing symptoms such as sneezing, runny noses, lethargy and coughing. The animals were removed from their exhibit for behind-the-scenes care and are expected to make a full recovery, the release stated.

The virus that causes COVID-19 is zoonotic, meaning that it originated in animals — most likely horseshoe bats — and may have passed through another species before making its way to humans.

“It’s critical right now for the world to focus on preventing human-to-human transmission of the virus,” Gillespie says. “But it’s also important to consider the longer-term, bigger picture of how pathogens can spill over from animals to people and then back to animals again.”

Gillespie helped pioneer the One Health approach to protecting humans, ecosystems and biodiversity. The primary risks for future spillover of zoonotic diseases are deforestation of tropical environments and large-scale industrial farming of animals, he says.

In late 2020, COVID-19 outbreaks were seen in mink around the world, including the United States, at farms that mass-produce the animals for the fur trade. The mink are kept in densely packed conditions that are ideal for spreading pathogens, Gillespie says.

“The good news is that there are relatively few documented cases of animal transmission to humans, and these appear to be restricted to the most ideal conditions for transmission, such as the crowded conditions of industrial mink farming,” Gillespie says.

Ferrets are a common laboratory model for the study of respiratory diseases, due to their unique respiratory biology. Experimental studies have shown that they can easily be infected with SARS-CoV-2.

The black-footed ferret is among the most endangered mammals in North America. That prompted researchers at the U.S. National Wildlife Health Center last December to start testing a veterinary vaccine for COVID-19 on a captive population of the animals at the National Black-footed Ferret Conservation Center in Colorado.

“Testing of wildlife is rare,” Gillespie says. “And most testing of captive animals is done only if they show symptoms, suggesting there may be many more asymptomatic cases. There are a lot of important questions into how SARS-CoV-2 may affect animals that we have not yet started exploring.”

The questions are important to protect both the health of animals and people, he adds.

“Widespread infection within a population of a novel virus is the kind of event that could potentially push endangered and critically endangered species over the edge,” Gillespie says. “And any time a virus enters a new species with different selective pressures, that provides more opportunities for new mutants of the virus to evolve and potentially spill over into humans.”

Bat ecology in the era of pandemics