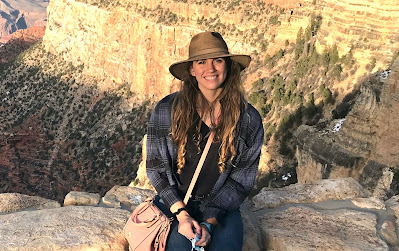 "One of the wonderful things about our model is that it's simple," says Mia Morrell, who did the research as an Emory senior majoring in physics. Morrell graduated last year and is now in New Mexico, above, where she is completing a post-baccalaureate physics program at Los Alamos National Laboratory.
By Carol Clark

The dynamics of the neural activity of a mouse brain behave in a peculiar, unexpected way that can be theoretically modeled without any fine tuning, suggests a new paper by physicists at Emory University. Physical Review Letters published the research, which adds to the evidence that theoretical physics frameworks may aid in the understanding of large-scale brain activity.

“Our theoretical model agrees with previous experimental work on the brains of mice to a few percent accuracy — a degree which is highly unusual for living systems,” says Ilya Nemenman, Emory professor of physics and biology and senior author of the paper.

The first author is Mia Morrell, who did the research for her honors thesis as an Emory senior majoring in physics. She graduated from Emory last year and is now in a post-baccalaureate physics program at Los Alamos National Laboratory in New Mexico.

“One of the wonderful things about our model is that it’s simple,” says Morrell, who will start a Ph.D. program in physics at New York University in the fall. “A brain is really complex. So to distill neural activity to a simple model and find that the model can make predictions that so closely match experimental data is exciting.”

The new model may have applications for studying and predicting a range of dynamical systems that have many components and have varying inputs over time, from the neural activity of a brain to the trading activity of a stock market.

Co-author of the paper is Audrey Sederberg, a former post-doctoral fellow in Nemenman’s group, who is now on the faculty at the University of Minnesota.

The work is based on a physics concept known as critical phenomena, used to explain phase transitions in physical systems, such as water changing from liquid to a gas.

In liquid form, water molecules are strongly correlated to one another. In a solid, they are locked into a predictable pattern of identical crystals. In a gas phase, however, every molecule is moving about on its own.

“At what is known as a critical point for a liquid, you cannot distinguish whether the material is liquid or vapor,” Nemenman explains. “The material is neither perfectly ordered nor disordered. It’s neither totally predictable nor totally unpredictable. A system at this ‘just right’ Goldilocks spot is said to be ‘critical.’”

Very high temperature and pressure generate this critical point for water. And the structure of critical points is the same in many seemingly unrelated systems. For example, water transitioning into a gas and a magnet losing its magnetism as it is heated up are described by the same critical point, so the properties of these two transitions are similar.

In order to actually observe a material at a critical point to study its structure, physicists must tightly control experiments, adjusting the parameters to within an extraordinarily precise range, a process known as fine-tuning.

In recent decades, some scientists began thinking about the human brain as a critical system. Experiments suggest that brain activity lies in a Goldilocks spot — right at a critical transition point between perfect order and disorder.

“The neurons of the brain don’t function just as one big unit, like an army marching together, but they are also not behaving like a crowd of people running in all different directions,” Nemenman says. “The hypothesis is that, as you increase the effective distance between neurons, the correlations between their activity are going to fall, but they will not fall to zero. The entire brain is coupled, acting like a big, interdependent machine, even while individual neurons vary in their activity.”

Researchers began searching for actual signals of critical phenomena within brains. They explored a key question: What fine tunes the brain to reach criticality?

In 2019, a team at Princeton University recorded neurons in the brain of a mouse as it was running in a virtual maze. They applied theoretical physics tools developed for non-living systems to the neural activity data from the mouse brain. Their results suggested that the neural activity exhibits critical correlations, allowing predictions about how different parts of the brain will correlate with one another over time and over effective distances within the brain.

For the current paper, the Emory researchers wanted to test whether fine-tuning of particular parameters were necessary for the observation of criticality in the mouse brain experiments, or whether the critical correlations in the brain could be achieved simply through the process of it receiving external stimuli. The idea came from previous work that Nemenman’s group collaborated on, explaining how biological systems can exhibit Zipf’s law — a unique pattern of activity found in disparate systems.

“We previously created a model that showed Zipf’s law in a biological system, and that model did not require fine tuning,” Nemenman says. “Zipf’s law is a particular form of criticality. For this paper, we wanted to make that model a bit more complicated, to see if could predict the specific critical correlations observed in the mouse experiments.”

The model’s key ingredient is a set of a few hidden variables that modulate how likely individual neurons are to be active.

Morrell wrote the computer code to run simulations and test the model on her home desktop computer. “The biggest challenge was to write the code in a way that would allow it to run fast even when simulating a large system with limited computer memory without a huge server,” she says.

The model was able to closely reproduce the experimental results in the simulations. The model does not require the careful tuning of parameters, generating activity that is apparently critical by any measure over a wide range of parameter choices.

“Our findings suggest that, if you do not view a brain as existing on its own, but you view it as a system receiving stimuli from the external world, then you can have critical behavior with no need for fine tuning,” Nemenman says. “It raises the question of whether something similar could apply to non-living physical systems. It makes us re-think the very notion of criticality, which is a fundamental concept in physics.”

The computer code for the model is now available online, so that anyone with a laptop computer can access it and run the code to simulate a dynamic system with varying inputs over time.

“The model we developed may apply beyond neuroscience, to any system in which widespread coupling to hidden variables is extant,” Nemenman says. “Data from many biological or social systems are likely to appear critical via the same mechanism, without fine-tuning.”

The current paper was partially supported by grants from the National Institutes of Health and the National Science Foundation.